An Interview with Lou Marsh - Part One 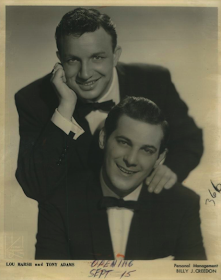 Lou Adams: Tony Marsh and Lou Adams grew up in the same neighborhood in Boston. We went to see a friend of ours in a nightclub and he was terrible. Tony said, "Jesus, is he terrible." The guy sitting at the table next to us was the brother of the comic onstage. He said with an attitude, "If you guys think he's so bad, then why don't you try it?" I looked at Tony and said, "Let's do it. Let's bet the guy ten dollars." There was an amateur night at this nightclub. We bought some records, a couple books and used a broomstick as a microphone and put together an act. 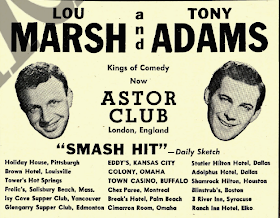 We looked at Martin and Lewis to see what they were doing and started bouncing off each other. In the audience was an old time comic. He said, "I'll help you guys out. You got a funny lookin' face and your partner is a good lookin' boy." So we got together with this comic and went to a little cellar in Boston and started working on it. He booked us into a pizza joint for a Friday and Saturday and I figured we'd get ten or fifteen dollars.

The guy said he'd give us sixty a piece. "Holy cow, sixty dollars, we're going to be rich!" He booked us and we stayed for twenty weeks. That's how it started. Then we got a manager. His name was Harry Adler. That started it. We started to do our own TV show down here in Miami Beach. We were down here for nine years at one club in the Barcelona Hotel and then we went to the Fontainebleau for three years. 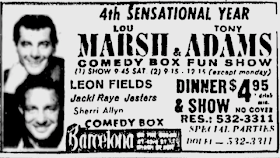 Every big club in Miami Beach was part of our life. Then we opened our own comedy club called the Comedy Box in Miami Beach. We went back on the road and we got lucky. They put us with Sammy Davis Jr. and Lola Falana and Bobby Goldsboro. We did charity shows with Frank Sinatra and we did the Jerry Lewis telethon from down here. We got very friendly with Jerry and did three movies with him. My partner got sick later in life and we slowed down. We took jobs periodically and my partner passed away and that was the end of Marsh and Adams. 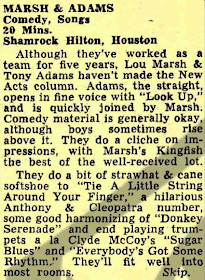 Kliph Nesteroff: What was the name of that old time comic who encouraged you guys?

Lou Marsh: I can never forget. The guy's name was Jack Black. He was an old timer and a funny man. There was another guy down here in Hollywood, Florida who did a lot for us named Harry 'Lefty' Lewis. He was the greatest ad-libber in the world. The greatest. We had a lot of friends who decided to help - but it was Jack Black who started us off. 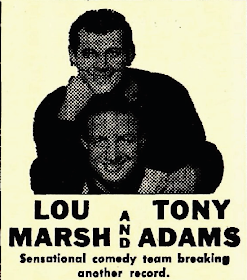 Lou Marsh: Frankie Keenan was a guy who looked like Jackie Gleason. We used him as the emcee at the Comedy Box and Jackie Gleason used to come in at least twice a month. He'd sit there, watch us, and then put us on his show. We did a movie with him - How Do I Love Thee. Frankie  Keenan looked so much like Jackie it was frightening and he put him on his show when Jackie wasn't there, which was funny. Frankie had a lot of ability too. He was in the business long before we got into it. 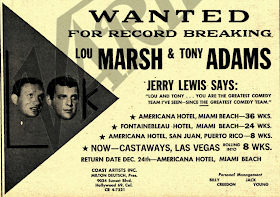 Kliph Nesteroff: There was another comedian who was a regular at the Comedy Box named Leon Fields.

Lou Marsh: Leon was a very funny man. He was just a comic that we liked. We used to have two or three comics on the bill with us at the Comedy Box. We did it for a long time. When we first came to Miami Beach we were booked in an ice revue. The first couple weeks we kept slipping on the ice. 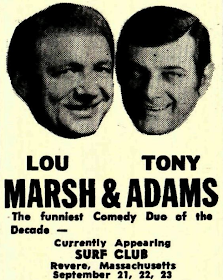 Lou Marsh: Oh, how could I forget Hot Springs, Arkansas. That was one of the thrills of our life. Jesus, how did I forget that. We went there for two weeks and stayed there four months. Hot Springs, Arkansas. Wherever we went we'd sit down and have dinner. "Send us the bill." "No bill, no bill." We ate for nothing, slept for nothing and played the horses like we owned them. In fact, while we were there they named a horse Marsh and Adams. Tony and I would go down there at three in the morning with our trumpets and serenade our horse. Boy, we were kings at that time. 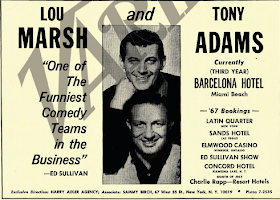 Kliph Nesteroff: April 1960, you guys played the number one club in your hometown - Blinstrub's in Boston.

Lou Marsh: Blinstrub's was the club that every act with any kind of name would work. It took us a long time to get it because we were Boston kids. Finally the owner caught us at one of the pizza joints and said, "They're not bad. Let's put them on with Nat King Cole." We were with him at Blinstrub's and then he took us with him to Syracuse, New York.

Lou Marsh: Three Rivers Inn, yeah! So we did that with Nat King Cole and he said, "I'm playing Syracuse, would you join me?" "Will we join you! Anything you want we'll do!" So we did that for three weeks with Nat King Cole. Not to be too braggadocios - but whatever we did was great. Now you're saying, well, why didn't we become bigger stars? Well, we screwed it up by wanting to be at home instead of in Las Vegas. In Vegas everyone was coming to see us - producers, directors, but we wanted to be home with our kids. It was the turning point of our life. Had we stayed in Vegas, I have no doubt we would have been stars - and I hate to say this but - we were as funny as anyone who was funny. 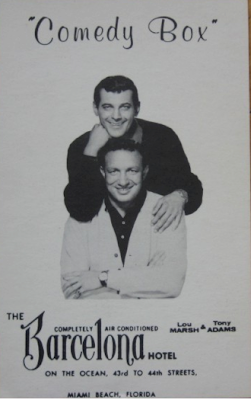 Kliph Nesteroff: What do you remember about working with Marie MacDonald at the Tradewinds in Chicago?

Lou Marsh: She was a sweetheart. She was a very delightful lady. The first night we opened she said, "Tell the boys to do twenty minutes." We usually did forty-five minutes. Anyway, I said to Tony, "Well, let's see if we can do it. Let's do twenty." We went on and did a great job as usual. She had a little problem with her first couple numbers. We got along with her, but we never went back with her. Our manager said, "No, if people are telling you to cut your act then forget them. Do your forty-five minutes." 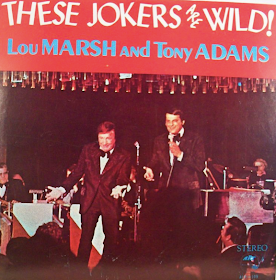 Kliph Nesteroff: And the comedian who followed you guys in was Allan Drake.

Lou Marsh: Allan Drake was a... very funny... as a matter of fact... Redd Foxx. Redd Foxx and Allan Drake. Redd Foxx was working a little place in Vegas across the street from the Sands. Small club, brand new. We stayed there for a couple months and that's where we met Jerry Lewis. We became very friendly with Jerry.

Kliph Nesteroff: You were Miami Beach comics. How come Jerry Lewis didn't use you guys in his film The Bellboy? 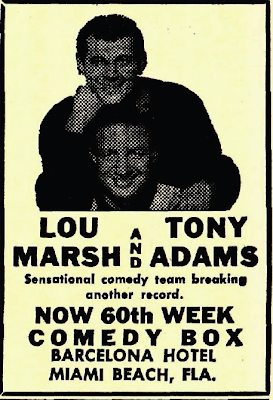 There was another man named Eddie Schaeffer - he was one. Between all of that we roasted a lot of big names at our club the Footlighters; Dean Martin, Sammy Davis, Milton Berle, a gang of 'em. Anyone you name we roasted. The Footlighters got up to five hundred members.

Kliph Nesteroff: What do you remember of Don Rickles in that era?

Lou Marsh: We never got friendly with Don. Don's mother used to come in and see us at the Comedy Box. We ran into Don one time and he said, "How's my act doing?" Because we had stolen a lot of material from him.

Kliph Nesteroff: How about a place called Eddy's in Kansas City? 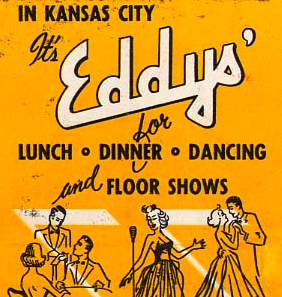 Kliph Nesteroff: I had heard that Eddy's was notorious for its managers, three short brothers that were all Mob guys...

Lou Marsh: Allan Drake was just a comic, a funny man and... I'd rather not talk about the rest of it. 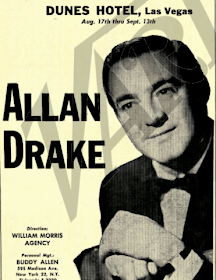