Kliph Nesteroff at 12:08 AM No comments:

Kliph Nesteroff at 11:50 AM No comments:

Kliph Nesteroff at 11:34 AM No comments:

Kliph Nesteroff at 10:49 AM No comments:

Dick Curtis: I was so surprised to see that poem you found. I wrote it and then bought a space in Variety. It was seventy-five dollars. And then the producers, Pepiatt and Aylesworth, they got mad as hell at me. They said, "Why didn't you let us know about the back page of Variety!?" I said, "Well because it was something I did for Jon when you weren't even here." They were the producers of only the second year. You guys weren't even here, that's between Jonny and I. He said, "Well, how do you think it makes us look?" I said, "Listen, buy the back page now!" And they did. Well, they were very mad at me, those two. They didn't... we were never friends. They were enormously successful, but they weren't swell fellas and they never did like me the whole last year they produced The Jonathan Winters Show. I don't know [what it was]. They had problems. They thought they were Canadians, everyone else was American and they wanted to prove they were just as good as Americans. They had that going. I had been on the show a year before they even showed up. So I didn't owe them anything, except when they first came on the show I said, "Oh, good! Nice to have you on board fellas, hope you have a good time." But I didn't owe them anything, you see what I mean? They were appropriately not too friendly. They fired me down the line. I forget how far down the line. I said, "Okay." And I went home. I got a call from the top guy Peter Lafferty at CBS. He said, "Did they fire you today?" I said, "Yeah, they did." He said, "Well, they can't do that!" I said, "Well, they did!" He said, "Well, I'll work on that." CBS had paid me to sign with them. They were planning a series for me. Andy Griffith wanted me to come in and replace Don Knotts. This was all going on while these guys were firing me! I got a call from the head lady at CBS. She said, "Dick, we'd like you to come back to the show." I said, "Yes, of course. And I would like you to add two thousand dollars to my salary." She said, "They're not going to do that, Dick." I said, "I really don't care. That's what I want in order to come back to the show. They've already made me go through the pain of being fired. I want two thousand more dollars a week." That would've meant that I only would've been making twenty-five hundred dollars. Can you imagine making a salary like I had on a show that had a forty-eight share? It was absurd. But I didn't want to rock the boat the first year.

Kliph Nesteroff: Who was in charge the first year? It was Peppiatt and Aylesworth the second year...

Dick Curtis: Shelley Keller. Shelley was the producer and then they had an associate producer and Jorn Winter was the director and I knew him from way back. It was Jonny who hired me because he liked what I did with him. He and I were heavily involved in the first and second year. I was in everything he did. I figured that five hundred dollars a week wasn't a whole lot of money. I took it because I wanted to establish myself on network television. I didn't want to rock the boat. The second year I figured they'd give me a raise. They did. To six hundred. When they fired me I said, "Well, now I do deserve some money." So I asked for two thousand more. I said, "Listen. I will come to rehearsals and you take that information to the top people at CBS." They kept stalling me. Anyway, Peppiatt and Aylesworth were furious that I took asked for more money. I said, "Guys, it has nothing to do with you. It has to do with CBS and I. That's it. It has nothing to do with you or anybody." They didn't understand it.  They stalled me until Sunday night and dress rehearsal was on Monday. They called me Sunday night and said, (speaking quickly), "Okay Dick, they agreed to your terms, be here tomorrow." I said, "Oh, thank you." Peppiat and Aylesworth were astonished I got the money and they quit talking to me. Perry Lafferty, when the show was finally over, said, "Dick, Peppiatt and Aylesworth are starting a new show and I want you on it." He gave me the address of the office. I went over there... and they wouldn't open the door (laughs). I knocked on the door because it was locked. They came, looked through the crack and said, "What do you want?" I said, "Perry Lafferty told me to come over here." "Nope, we're not doing what he says, we're not hiring you." I said, "Well, it's CBS who..." "We don't care!" And they slammed the door (laughs). So that what was going on at that time. And then I started burning my own bridges (sighs). I went, appropriately and rightly, down hill from there. I became a director producer and started working in another area of the business.

Kliph Nesteroff: What was your relationship with Jonathan Winters like?

Dick Curtis: It was good all the way through. Jonny and I got along well and we worked well together. We had an excellent arrangement the first year and the second year. It was difficult the second year because they were trying to make the show like Laugh-In the second year. They wanted quick comedy.  They left the things that worked like a segment called Face the Folks that Jonny and I did. But they wanted quicker sketches and blackouts and that kind of thing. It was trying to cash in on what Laugh-In was doing and it was no longer the same thing. They should have stuck with the way it was, but... executive persuasion. Jonny and I always had a good relationship. First of all, I'm from Indiana and he's from Ohio. We were both former marines in World War Two. We had a level... but somehow or other over the years ... Jonny and I were very close and then we just sort of drifted apart. I was chasing production. I was producing all over the world and different little things and Jonny was doing his thing. We didn't see each other for a long time. And then I went to one of those signing things where people pay you for your picture and you sign it and all of that. He was there. I walked up to the table where he was signing his autograph. I said, "Hey, Jonathan!" His son came up to me first, actually. I knew his son when he was a kid. He walked up and said, "Mr. Curtis, it's such a pleasure to see you again." I said, "Oh my God, kiddo! How are you? How's your dad?" He said, "He's fine. He's right over there." So I walked over and said, "Hello, Jon!" He jumped up from the table and started behaving like a cornered animal [makes growling sounds]. I thought, "Well, I guess he's doing a bit with me, I guess." I said, "How you doing, pal?" And he just kept on doing that. A guy walked up behind him and said, "Hi, Jon, I've been looking for you." And he walked off with the guy. I tried calling him at home and tried talking to him. He was mad at me. Jonny is peculiar. He can be mad at you and you don't know why.

Kliph Nesteroff: Do you think he was embarassed at the fact you found him at an autograph show? Maybe you saw him in a vulnerable situation.

Dick Curtis: I don't know. It's hard for me to speculate. He is penurious guy. He has the first dollar he ever made. And he is terribly wealthy. So he didn't spend ten cents he didn't have to. He is quite penurious. That never bothered me. I didn't try to be his friend because he was rich. He and I had laughs together and fun. We had a working relationship that was second to none. It was just wonderful. We hung out together at his house and we were friends, so I don't know what happened... and it's still going on. I intend, before I reach the great beyond, to try and discover why. I have nothing to lose. I knew his wife well, but when she died I wasn't invited to the funeral or anything. Nobody even called me when she died. So it's just, y'know, a sad thing for me. Jonny had a lot of laughs together and did a lot of good things together. It's a strange business. Peppiat and Aylesworth may have somehow gotten to him. I don't know. Maybe it was somebody else. It was a weird business with a lot of weird people in it. Take me for instance.

Dick Curtis: (laughs) Anyway, pal. That's all I know about Jonny. Jonny will answer the phone. I used to call him and he'd say, "Tower." I'd say, "Is this the tower?" He said, "Yeah." I said, "Well, look, I'm flying directly at you and I don't know how to pull out of this because I just took my third lesson today." He says, "Goodbye." He answers the phone in funny ways like he's the police department or something else. So he might do that if you call him. It's all in fun. Jonny is terribly inhibited. He is very uncomfortable around most people. That's why he and I go along so well because there was no nonsense, we were just friends.Red Skelton got so big that they couldn't pay him enough to keep him on CBS. What they did was they said, "Okay, you own eight o'clock - Thursdays. That's yours." He could sell it to anyone he wanted for an hour. When I was on The Jonathan Winters Show - Red had a piece of that action and my checks used to come out of Red Skelton's office.

Kliph Nesteroff at 12:10 AM No comments:

Kliph Nesteroff at 12:05 AM No comments:

Kliph Nesteroff at 10:54 AM No comments:

Can You Hear the Laughter: The Freddie Prinze Story (1979) 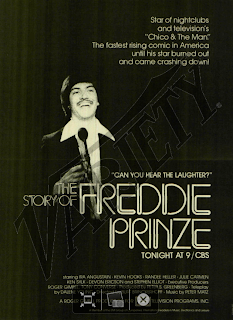