Tom Snyder reunites the cast of the 1950s Superman television series, The Adventures of Superman (it has recently been released on DVD). And just so you know what this is all about, here's an ad for the Superman show too.

Kliph Nesteroff at 12:21 AM No comments:

The Mike Douglas Show with guests The Supremes (1973)

The Mike Douglas Show with guests The Supremes (1976)

The Mike Douglas Show with guests The Supremes (1977)

The Joey Bishop Show was a late night talk show that ran from April 17, 1967 to spring of 1969 on ABC. It was ABC's attempt to compete with NBC's Tonight Show with Johnny Carson and of course it failed. Each episode was ninety minutes in length. ABC offered Bishop his own late night talk show after seeing how competent he seemed to be guest hosting for Carson. As you will see at the start of this clip, his sidekick was Regis Philbin. Previously this timeslot had been held by a news discussion program called The Les Crane Show. When Joey was canceled, he was replaced by Dick Cavett. Bishop's talk show should not be confused with his sitcom of the same name that ran from 1961-1965. That show is on DVD but the talk show is not.
To read what kind of a connection Joey Bishop had Canadian mobsters check out this article - part one and part two.

This episode of The Joey Bishop Show features cameos from Joey Bishop's brother and Sammy Davis Senior! Originally aired February 1968.
Comic book historian and old showbiz fan Mark Evanier tells an interesting story about a Regis Philbin controversy that once occured on The Joey Bishop Show:
One of his highest ratings came after a taping when Regis Philbin abruptly announced that he was quitting the show. The one day delay worked to the show's benefit that time. The news spread and much of America tuned in to hear Philbin announce -- apparently stunning Joey -- that the network had never wanted him in the first place and that he had endured too much criticism from them that he was dragging down the show. A few nights later, everyone watched again to hear Bishop announce that everything had been smoothed over, after which he welcomed Regis back to the show. The incident gave Joey two of the few nights he beat Carson but several TV critics suggested it was all an arranged stunt.
Kliph Nesteroff at 2:00 AM 11 comments:

A clip from the premiere episode of The Tonight Show with Steve Allen, at the time known as Tonight!

Kliph Nesteroff at 1:44 AM No comments:

The Jacksons with guest Redd Foxx (1977)

Redd Foxx dances with Michael Jackson in this opening sequence of The Jacksons variety show.

Kliph Nesteroff at 12:04 AM No comments: 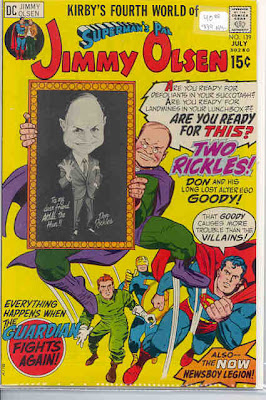 From a rarely seen 1975 CBS Special titled Rickles. It features a good example of what Rickles' live act is still like today. He sings, he dances lightly and, of course, he hurls insults. The song "I'm a Nice Guy" is still performed today (listen for the line about everyone in the band being high) at every Rickles gig. As with the most recent Rickles post, this one features many several bizarre celebrity cameos. Otto Preminger delivers his weirdest work since Skidoo (1968) - Preminger singing and doing musical shtick with Rickles on stage? I'm reverting back into that "James Brown, Little Richard, Weird Al Yankovic on Wheel Fortune together" dream state. It seems too much like a dream to be real. Like that dream I keep having about teaching a sheep how to tap dance - except with celebrities.

I just want to state right off that I know this is not showbiz related. But let's just pretend it belongs on this site and enjoy it.

Kliph Nesteroff at 5:18 PM No comments:

Tony Curtis Overacting and Hurting Someone

Name the movie. Winner gets nothing.

Unfortunately this has been removed from YouTube for the time being. The man who uploaded it often has footage appear, disapear and then re-appear at a later date. I don't know why. Hopefully that later date will be soon.

Perhaps the greatest political comedian of all time is Dick Gregory. In the same league as Mort Sahl, George Carlin, Dick Davy, Bill Hicks, Lenny Bruce and a handful of others, Gregory's comedy was devoted to a greater cause than simply making people laugh. His comedy LPs are among the most meticulously ever crafted. His material was brilliant and enlightening. Recently, he did some lush theatre gigs with Mort Sahl, a dream bill if there ever was one. Here he is in a PSA that obviously never did one bit of good.

Kliph Nesteroff at 10:54 AM No comments:

The Tonight Show with Johnny Carson with guest Steve Martin (1974)

Kliph Nesteroff at 3:27 AM No comments:

The Tonight Show with Johnny Carson with guest Frankie Yankovic

Kliph Nesteroff at 3:27 AM No comments:
‹
›
Home
View web version